the best weekend ever!

**The NYC Marathon in 2013 will always be the best DAY ever. At least until I run it again.

My weekend began with an adventure of train rides from WTC to Newark to Trenton to Philly. I’m getting really good at navigating my way through the NE! Once I arrived in Philly I checked into the hotel and did my shake out run to the Philadelphia Convention Center.

Turns out this was only a four minute run from the hotel, so I continue for about 15 more minutes running through the streets of Center City Philly. Once back at the hotel I met Leticia and her friends for dinner. We ended up at an Italian restaurant and I was VERY happy to see salmon and risotto on the menu. I’d eaten salmon mostly prior to my long training runs, so I was glad to keep this consistent. After dinner we headed back to the hotel and I got race day ready!!

I love these earrings! I call them, “Cross Country Winged Earrings.” Despite Georgia’s terrible showing versus Florida, I wore my G on my face during the race, the entire rest of the day Saturday, and all day Sunday. That shows how busy of a weekend it was!

I surprisingly slept well Friday night and woke up Saturday a couple minutes before my alarm was to go off. I had a piece of bread with almond butter, water/gatorade, and a banana. The start was about a 15 minute walk from the hotel so I headed out around 6:45am for the 7:30am start.

I arrived at the race start with hopes of having enough time to use the portapotty one more time. This did NOT happen and would be my only complaint of the race. The lines were at least 100 people long. Thankfully I was a-ok not using one!

And now for my most detailed race recap ever.

Start: I got in my corral around 7:10am and did dynamic stretching. I noticed that a few people that were definitely in the wrong corral, and should’ve been much further back. (Ok that’s my second complaint to RockNRoll crew). I made sure to get in front of them and ended up in the corral ahead of where I was supposed to be. I started the race right around 7:40am. Threw off my jacket and kept on gloves.

Oh, before I forget. My goals: break 1:55, run 8:40 pace, cross mile 12 before 1:44…Weather: entirely, absolutely perfect. 39/40 degrees at start… Watch: I also used my watch without GPS, using simple timer mode while I pushed the button for pace at each mile marker. Though this meant I don’t know exactly how far I went it or if I ran tangents or not, it was really nice not being annoyed by my watch beeping before the mile markers.

Mile 1- I felt so good at the start and didn’t at all feel crowded by the other runners.  I decided to let mile 1-3ish be what they were time wise and not push myself too hard because I knew the course would open up after that. I was comfortably cruising along and pulled 8:40. In my mind I was thinking, “Oh man my goal pace!! Is that too fast?! Maybe slow down a little!”

Mile 2- running through Center City with lots of turns. People around me really going my same pace. Continue cruising- 8:35

Mile 4- last back of two out and backs through Center City- 8:40 (finally slowed down a little!) I threw off my gloves here and took off my ear warmers. Towards the end of the race I was wishing for my gloves again!

Mile 5- heading up along the river. The street opened up so nicely here! I took my first 2 honey stingers and washed them down with water- 8:25 Speedy again!

Mile 6- river continued to be gorgeous and flat. So many pretty fall leaves! I noticed a woman in red shorts who was about 10-20 meters in front of me the past couple miles so I decided to keep my eyes on her the whole race. She was definitely running strong. I knew it was not quite time to take it up a notch so I attempted to go a little slower here- 8:26 (well at least I’m being consistent!)

Mile 7- still nice and open- 8:31 At this point I was thinking, “Now just get to mile 10! Man I’m glad I’m not running a marathon! I wonder which of these bridges we’ll take to cross the river? They look quite steep!”

Mile 8- Thinking, “This is great and when will we cross this river?!” Finally we did cross the river and the bridge wasn’t steep at all (whew!) We did run downhill on the other side and oddly enough downhill slows me down sometimes thus- 8:45 (slowest mile of the race).

Mile 9- heading down the river back to the city, still taking in the gorgeous trees. My knees were getting a little achy at this point- 8:36

Mile 10- I was so happy to be at this point but suddenly not wanting it to end!! I trained so long for this and now I was ready to take it up a notch!!- 8:17

Mile 11- Consistency again- 8:17 and I thought, “Could I break 1:50?!” then told myself to take it one goal at a time. My legs began to feel somewhat numb but not terribly painful.

Mile 12- Getting so close!! I literally didn’t want it to end. I had so much energy and was so ready to go and at the same time my legs were definitely getting tired. I almost felt as if my legs were a little wobbly and could collapse below me. This mile came in at 8:33 which wasn’t excellent nor terrible. At least it meant I had some gas left in the tank for the last 1.1 miles!  Oh and I got here at 1:42 so knew I had a PR in the bag so long as I didn’t fall or something, and knew I’d seriously have to haul it to break 1:50. (Absurd how this became my new goal haha. Isn’t breaking 1:55 enough?!)

Mile 13- Very excited to be back in the city! Gregg had told me to run like Hershel Walker (channeling my inner Bulldawg) so that’s what I was thinking. I also was thinking about how I shouldn’t run like Knowshon, Gurley (did in college), or Chubb and end up with a season ending injury. Clearly I was losing my mind at this point haha!  I was also looking for meter countdown markets. 800m?! No. 400m?! No! (ok fine RNR complaint #3) I hear watches beeping and know we must be getting close to 13.0 and just ran- 8:06!!  Also I got a weird twinge in my lower left back so made sure to keep my core engaged and I kept running!

0.1- There is a little uphill here but I didn’t really notice. I kept running and did a fist pump at the finish though the camera didn’t catch it!! 0:49 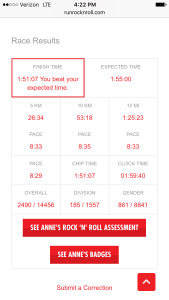 It was the weirdest feeling at the end. I put my hands on my knees as if I was exhausted for literally a second then stood up and felt fine. I almost felt like I had something left in me and was thinking “That’s it?!” Maybe it’s because I hadn’t run 13.1 since May of 2014 and I was used to feeling so totally spent after a marathon. It’s like the upper half of my body could have kept going forever, and my legs were just done. I was also so sad it was over!! I got my medal, water, a banana, chocolate milk, and a heat blanket.

We went back to the hotel and I showered and got warm. Then I crushed brunch at Mixto. I totally recommend it. Any place that has french toast, bacon, AND eggs is a win in my book!!

You’d think the weekend would end here but NO! This all happened before noon on Saturday so I had tons of weekend ahead. After visiting a few bars in Philly, I headed to my good friend’s house to watch the first half of UGA/UF, and then we headed to Lincoln Financial for tailgating at to watch Notre Dame versus Temple. This was one of the best college football games I’d witnessed in person in a while! 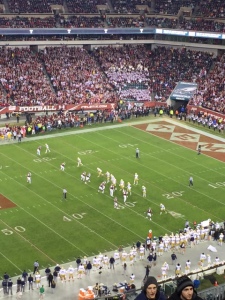 Shoutout to Temple for really showing up! Their fans were in it to win it, though that didn’t work out for them. I was REALLY grateful for the time change and was able to pull about 6 hours of sleep before waking up early to head back to NYC to witness this:

No way I could miss cheering all my friends (Kelly seen here!) in the NYC Marathon!! HUGE CONGRATS TO EVERYONE WHO RAN!! After a full day of cheering, a Dough donut, and McDonald’s nuggets (yep and so good) I was ready to crash around 5:30pm last night. What an amazing weekend!

I capped it off today with lunch with my incredible marathon friends/heroes and got to see the marathon winners at the cool new NYRR pavilion in Central Park!

2 thoughts on “the best weekend ever!”